This morning, the White Flint Partnership sponsored the third event in its speaker's series. The subject today was on the future of jobs in Montgomery County and, in particular, the vision for the White Flint sector. Speakers were Nancy Floreen, county council president (thank you for the correction in the comment below); member of the PHED committee (also attending was fellow PHED member Marc Elrich), Dr. Stephen Fuller, director of the Center for Regional Analysis and professor at George Mason Univ., and Jim Dinegar, president of the Greater Washington Board of Trade. Here is a summary of their comments:
Nancy Floreen- the current job status in the county is better than the country in general, but the county was still affected by the recession. We have 5.2% unemployment, with 13,000 jobs lost in the county in 2009. The county is 2nd to last in the Metro area in job growth. Relative to the rest of the country, this is good, but the county is actively seeking means to encourage business to grow and to add jobs. The White Flint Sector Plan council review has been in the PHED committee and will go to the full council next week. They will begin with the staging plan, with an emphasis on determining funding levels and developing an appropriate public-private financing plan. There should be a decision out of the full council by mid-March. With regard to the county in general, she is trying to create a Montgomery Business Partnership which will work with the Chambers of Commerce and the Office of Economic Development. It was not clear what the purpose of the partnership will be as opposed to what the Chambers are already doing.
Prof. Fuller- although not official, the recession ended last June, and we are 8 months into the recovery cycle. The labor market hasn't stabilized yet, and there has been job loss of approx. 25,000 in the region, with Montg. Cty. taking a proportionally large "hit." The federal government has created 13,000 jobs, most of which are on the higher end in salary and education requirements. Unemployment nationwide will decrease slowly during the next several years. His forecast for Montgomery County for the next ten years (2010-2020, which is short-term in forecasting terms) includes the following: there will be a slowing of job growth (less than the metro area average), giving the county a smaller share of the regional economy. This, however, includes 20% job growth and 44% economy growth during this 10-year period. 25% of people who are currently employed in the county will retire or separate from their jobs, so that "new hires" will have to include replacing workers in existing jobs. Housing units lag behind jobs, and, with 49,500 housing units proposed to be added, this will only be 2/3 of the units needed for the job growth projected. In other words, we will not be building enough housing to accommodate the workers and their households that will be coming to the county. There is a need for more housing locally in the county. There is a high proportion of available jobs that require higher education and experience and are higher-salaried, with much of the available labor force in the lower-salaried retail, service industry, and construction sectors.
Jim Dinegar- there is a great opportunity for advancing the region in several industries in which the Metro region is already strong. These include health (NIH & bio-tech), hospitality (Marriott, Ritz, and others), green research & technology (BP Solar, ULI, AIA, Green Building Council, and numerous others), and cyber-terrorism (Google security headquarters debating coming here or to Texas). Do not underestimate the power of BRAC to bring related companies to the area and to affect our region, nor of NIH & the new Johns Hopkins campus to influence business relocation. We will never be a manufacturing center, so should be concentrating on our strengths, which include the presence of the federal government and all of the industries above, transportation systems, availability of suitable housing, entertainment, recreational, and cultural opportunities, and school quality.
Each speaker recognizes the changing character of our unique location, which was, until recently, a suburban community serving jobs in DC. The growth of business and federal involvement in Montgomery County dictates a re-alignment of the vision of the future to an urban community (in close-in Montg. Cty), utilizing smart-growth concepts to create higher density and provide cultural opportunities without overloading the transportation system.
Posted by Emily's Blog at 12:05 PM 1 comment: Links to this post

After the storms- preventing ice dams in the future

There are a couple of ways to minimize ice dam damage or to avoid the ice damming problem altogether.

1.This method can only be implemented when you install a new roof. Insist that your roofing contractor install an ice dam shield material under the shingles toward the gutter edges of the new roof. This is a strip of material that will prevent water, backed up from an ice dam in the gutters and on the roof shingle edges, from seeping back up the underside of the shingles. This will not prevent the ice dam process, but should prevent it from destroying your interior ceilings, walls, etc.

2. Add insulation on your attic floor and improve ventilation inside the attic. If your attic air space is not conducting heat from the house (through the attic floor) to the underside of the roof underlayment, the ice on the roof will melt more slowly, giving it time to drain properly without seeping under the shingles. This is not foolproof, but is a prudent precaution. Besides, it makes your house more energy efficient. Try using a cellulose insulation and get the federal tax break!

3. Prevent ice dams to begin with. You can install gutter heating strips. When the next huge storm hits, you can plug in the strips so that ice will never form in your gutters again. I have not researched these completely, but it seems that you can also install a sensor that will turn the strips on when conditions require. Go to www.heatersplus.com and search for Wrap-On Roof and Gutter Heating Cable, EasyHeat ADKS Roof and Gutter Heating Cable, Danfoss RX Roof & Gutter Deicing Cables, EasyHeat PSR Pre-Terminated Self-Regulating Freeze Protection Cable for Water Pipes and Roofs, or Chromalox Commercial Grade Roof and Gutter Heat Trace Cable.

Posted by Emily's Blog at 4:24 PM No comments: Links to this post

Ice Dams- the next step after the storm

For many people with townhouses or detached houses, the huge amount of snow on our roofs will soon create ice dams. As a result, we will see water leaking into our houses, most likely near the junction between wall and ceiling. There is nothing that can be done to prevent this happening, but you may be able to reduce the damage. First, what is an ice dam? This occurs when the snow melts from the roof (it will often melt at the shingle level, since that is warmest with the heat from the attic). The water flows under the ice pack, ending in the gutters and downspouts, where it freezes. Once the gutters freeze full of ice, the continuing water melt backs up under the ice pack and on top of (and often, in between) the shingles. Freezing water at the shingle level will lift the shingles, so that water will now flow beneath the shingles. With no other way out (remember, the gutters are frozen, so nothing is passing through them), the water seeps into the attic or through the wall at the edge of the attic and house exterior. How will you know that ice damming is occuring? You may see buckling on your ceiling, or water dripping down the walls. In our house, the water pools above the bay window (a great place for an ice dam to occur, since it juts out from the exterior wall, just under the roof line) and then drips onto the window sill. This will damage drywall, paint, woodwork, etc. Will insurance cover it? Since this is a problem that comes from above, it is normally covered by homeowners insurance. If you ever have a water problem that comes from seepage from the ground, that would not be and would 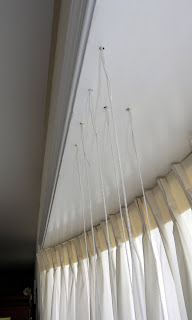 require a separate flood insurance policy. Ice dams, however, are storm-related and roof-generated, so you can put in a claim. So, what on earth are these pictures on this blog???? This is our method of minimizing the damage. Since there would be water pooling in the ceiling area, we have drilled small holes in the ceiling (where we had similar damage in 1993). In each hole is a piece of a paperclip, cut to look like a U, with a string tied to it. The paperclip is inserted in the hole so that, when the problem is over, it can be pulled out by the string. The string is then hung to sit inside a bucket on the windowsill. This way, when water pools above the holes, the water will travel down the strings and collect in the bucket. We will not have actual water damage to the woodwork or drywall (most likely), and only have to patch the holes when it is all over. Can ice dams be prevented? Not at this point, but, if you are installing a new roof, ask your roofer to install a barrier near the roof edges that is designed to prevent the movement of water below the shingles in the event of a huge storm like this. Also, if your house is well-insulated in the attic area, it will prevent the heat from the house from melting the snow pack on the roof too fast so that your gutters may (just MAY) have time to handle the flow. Not a fix, but can't hurt. If you decide to add insulation to your attic, please be conscious of the environmental qualities of the insulation that you choose. We added blown-in cellulose to our attic a little over a year ago (made the house much more comfortable!), which is a recycled material and has great insulation qualities. Happy springtime musings, but get out there and enjoy this lovely winter while we have it. 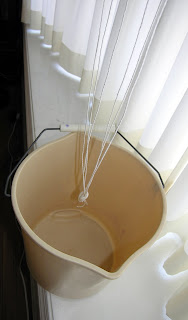 Posted by Emily's Blog at 5:34 PM No comments: Links to this post

Emily's Blog
North Bethesda, Maryland
Emily Mintz is a long-time resident of North Bethesda and has been a realtor since 1983. She has been active in local politics, particularly as it pertains to the rational development of North Bethesda from its suburban origins to a major urban center. She has championed transit use and availability as key to managing traffic congestion and is working to enhance collaboration among the communities in the area to address residents' concerns about the pace and type of development planned for the area. Along with the issues of smart growth and transit in an urbanizing area, Emily is deeply concerned about energy conservation and the application of earth-friendly technologies and materials to residential real estate. Her blog addresses local North Bethesda issues, development concerns and opportunities, transportation solutions, "green" construction and remodeling, and the state of the real estate market in Montgomery County.