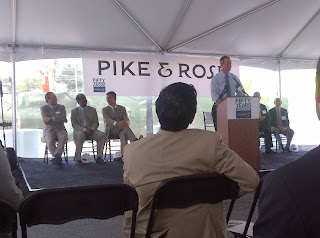 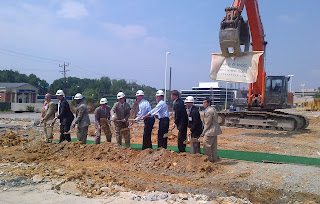 The ceremony on 7/16 was a happy event, with attendees including Gov. O'Malley, Lt. Gov. Brown, the comptroller, many other state officials, Cty. Exec. Ike Leggett, Council Pres. Roger Berliner, Councilmembers George Leventhal & Hans Reimer, the CEO and other officials of Federal Realty Investment Trust, including Evan Goldman, who has shepharded this project and met with community members many times. Other developers were invited, as well as community members who've been active all along. It was hot, but a beautiful day. The speeches included discussion of the unique public/private financing arrangements that could be models for future development financing, the scale of the economic impact, and the commitment of the gov't and developers to create a transit-oriented community that is a benefit to the county and the surrounding neighborhoods. It was great fun to see the project begin.

Our old Mid-Pike Plaza will be the new Pike & Rose development. Currently 24 acres of asphalt, it will be 8-9 blocks of "green" buildings with ground-level retail, bike and pedestrian pathways, pocket parks, apartments and commercial space.

Emily's Blog
North Bethesda, Maryland
Emily Mintz is a long-time resident of North Bethesda and has been a realtor since 1983. She has been active in local politics, particularly as it pertains to the rational development of North Bethesda from its suburban origins to a major urban center. She has championed transit use and availability as key to managing traffic congestion and is working to enhance collaboration among the communities in the area to address residents' concerns about the pace and type of development planned for the area. Along with the issues of smart growth and transit in an urbanizing area, Emily is deeply concerned about energy conservation and the application of earth-friendly technologies and materials to residential real estate. Her blog addresses local North Bethesda issues, development concerns and opportunities, transportation solutions, "green" construction and remodeling, and the state of the real estate market in Montgomery County.